Below are a list of best practices and instructions for creating metadata in the Scholars GeoPortal. This list includes general 'how-to' explanations; for a detailed list of metadata fields used in SP's instance of NAP, and how to complete them, see the guide to NAP metadata fields on Spotdocs. A list of common errors caused by metadata, and how to troubleshoot these, is also available on Spotdocs.

Currently, the “Create New Record” function in the GISEditor is not working. To create a new record, either:

The file URI in Metadata Record Information should reflect the file/service name as it appears in our database.The structure of this name has meaning, which may vary slightly for individual collections. Generally, this structure begins with Collectionname, and usually includes year and product. For bilingual records it may also include language,which should come at the end of the name (for more information on this, see: Creating a Bilingual Service/Records). All names must start with /NAP/ and end with .xml

Note: If you are creating a record for a service that should function as an index (index functionality) this service must have _vt as part of the service name, and so as part of the URI. Otherwise, the GeoPortal does not understand how to present these services to the user. If you encounter an index service without _vt in the naming convention, please report this to Jo Ashley so that it can be corrected.

The title used should be the title supplied by the vendor. However:

The naming convention used for bilingual records at Scholar’s Portal is to use English naming for both, but append _Eng to the English record and _Fr to the French record. This applies to both the creation of imageservices and metadata records. Do not use other language codes such as Ang, Fra, Fre, etc.

When adding keywords, NAP requires you to include at least one keyword from either the LAC or MNR thesaurus. These thesauri are bilingual - when you search for a word, the search box will give you the option to add the french translation of this word as well. In all cases, both the English and French words should be added. This will help users who are more comfortable searching in French to locate relevant data. 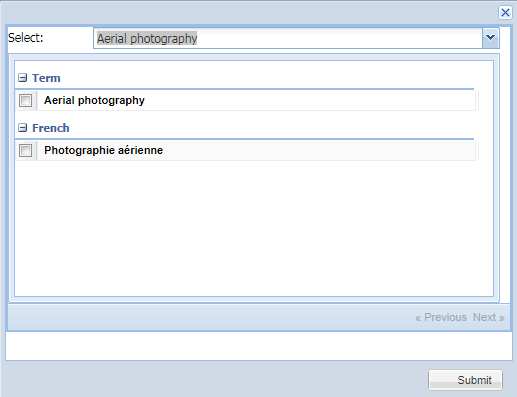 Note: If the English and French options do not show up when a word is selected, it is due to the zoom level on your browser being too far-in. Zoom out (ctrl - ), refresh, and try again.